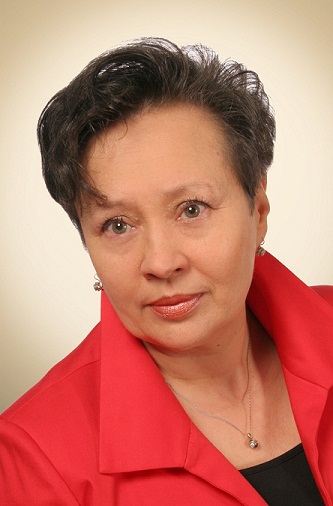 In the years 1978-1985, she studied at the the Academy of Music in Łódź. From 1986
till1988 she was employed as a soloist singer in the Bydgoszcz Opera, 1991-1993 in the
Warsaw Chamber Opera, 1993-1994 in Warsaw Operetta, 1988-2006 in the Great Theatre in
Łódź. As a student of the Academy of Music she started her pedagogical work of a solo
singing teacher (until 1986). In 2001, she commenced her work with the Department of Artistic Education at the University of Lodz as an adjunct professor, then in 2006 she took a position at the Fryderyk Chopin University of Music, Department of Instrumental and Educational Studies in Bialystok. From 2010, she has been working as a professor at I.J.Paderewski Academy of Music. in Poznan. She was awarded her first-degree qualifications in 2001, habilitation in 2005, and the title of professor in 2013. Seventeen years of teaching experience has resulted in a number of graduates who win the honours in vocal competitions and work on concert and opera stages. Her scientific achievements include numerous lectures at scientific conferences (foreign and Polish ones), publications and publishing reviews. She was a promoter and reviewer in doctoral proceedings and a reviewer in habilitation and professorial proceedings.

Anna Jeremus Lewandowska is very actively involved in cultural projects at the Music Academy in Poznań. She has been the head of the research project Soprano Voice – performance and education in the context of the development of artistic vocal art. She has published her work Voice techniques in the performance practice of coloratura soprano for two years.

She has in her repertoire over 40 operas, operettas and oratorio parts performed on the stage, most of them in the foreground. She began her artistic activity in 1986 on the stage of the State Opera in Bydgoszcz singing part of Rosina in Rossini&#39;s The Barber of Seville, Hanna in Moniuszko’s The Haunted Manor, Serpina in Pergolesi&#39;s The Servant Turned Mistress , and
Adela in Strauss&#39;s The Bat. Then she cooperated with the Warsaw Chamber Opera, performing Mozart parts, including The Queen of the Night in The Magic Flute, Sandrina in La Finta Gardiniera, Sifare in Mitrydate re di Ponto, Faun in Ascanio in Alba. She participated in numerous foreign tours of the theatre.

Anna Jeremus Lewandowska was the leading soloist of the Great Theatre in Łódź. During 18 years of her work on the stage of this theatre, she participated in many premieres and foreign tours of the theatre singing among others; Queen of the Night in Mozart Magic Flute, Violetta in Traviata, Gilda in Verdi Rigoletto, Norina in Don Pasquale, Adina in Donizetti The Elixir of Love, Rosina in Rossini The Barber of Seville, Hanna in Moniuszko The Haunted Manor, Musette in Puccini La Bohème, Gretel in Humperdinck’s Hansel and Gretel, Susanna in Mozart The Marriage of Figaro, Arsena in Strauss The Gipsy Baron and many more. As the soloist of the Great Theatre in Łódź she performed many times on the stages of theatres in Germany, the Netherlands, Spain, France during its artistic tours. She took part in the premieres of The Haunted Manor (1995), Halka and The Gypsy Baron in Chicago (1996), USA.

Moreover, she sang, among others: Elwira in of Bellini’s The Puritans, Queen of the Night in The Magic Flute, Constance in Abduction from Seraglio, Zerlina in Mozart Don Giovanni, Basia in Stefani Krakowiacy i Górale, Laura in the Millocker’s The BeggarStudent and others performances abroad and in Poland. Anna Jeremus Lewandowska has in her repertoire the oratorio parts, including: Bach The Matthew Passion, Haydn Creation of the World, Faure Requiem, Pergolesi Stabat Mater, Orff Carmina Burana, Moniuszko Mass in D flat major and others.

In the years 1998-2002 Anna Jeremus Lewandowsk participated in numerous music programs, presenting Polish composers and the most popular arias from opera and operetta repertoire for Regional Televion and Televion Polonia. She created Hanna’s part of the performance of S. Moniuszko The Haunted Manor, realized by TVP Polania (1997) and broadcast directly all over the world.

She also undertakes wide activities for the development of high culture in the local, district, provincial and nationwide environment. An important achievement in this field also organizational one is the creation and management of the Summer Music Festival in Kutno. Since 2010 she takes the position of the Director, creating an artistic and program concept and acting as a director of the festival events. She promotes classical music, in particular the works of Polish composers. Anna Jeremus organized 8 editions of the Festival (over 100 concerts, about 700 artists- performers).

She is the creator and organizer of the International Master Vocal Workshops in Kutno for young people who are talented vocally from Poland and abroad. Her activities constitute a platform for the development of innovative education methods in the field of artistic vocal and create an opportunity for young vocalists to present their achievements to the public. Since 2009 she organized 9 editions of the Workshops.

In 2002, she established the Music Promotion Foundation „ARTIFEX” to promote classical live music. As the president of the Foundation, she participates in many activities for particularly talented youth (scholarships, prizes) and cooperates with local authorities.

Anna Jeremus Lewandowska was invited to participate in the works of the Social Commemoration Committee on the 200th anniversary of Stanisław Moniuszko’s birth joining the outstanding people from various scientific, artistic and political backgrounds to promote high-class Polish national culture. He takes part in numerous charity concerts for the benefit of the environment.

In 2014 she was awarded the Bronze Medal for Merit to Culture Gloria Artis and in 2016 the Medal for Long-Term 1st Degree Service – Gold Medal awarded by the President of the Republic of Poland.

She received awards and distinctions for artistic activity: medal for Merit to the Kutno District, awarded by the District Council in Kutno and the District Board in Kutno for many years of artistic activity and outstanding achievements in the field of cultural development, popularization of knowledge about the territory and contribution to development and promotion of Kutno District in the sphere of social life, science and culture (2017); &quot;Pro publico bono&quot; Sabina Nowicka medal – for outstanding achievements for Polish culture and the city of Lodz, awarded by the Society of Friends of Lodz (2014); Honorary Award of the Mayor of Kutno in recognition of special merits in the promotion of Kutno through many years of artistic activity (2011); the &quot;Atlas of Culture&quot; award for artistic contribution in co-creation of the musical culture image of the 21st century beginning, the Association of Musica Sacra Music Lovers in Białystok (2010).